The store will not work correctly in the case when cookies are disabled.
FREE SHIPPING when you spend $30 or more

Good systems make great scrapes, and Tink’s gives hunters the tools and know-how to draw bucks to scrapes from summer through autumn for scouting and hunting.

Hunters who want to zero in on mature bucks will achieve more consistent results by making and maintaining scrapes and scrape lines that bucks can’t resist from summer through hunting season.

All it takes is creating a foolproof system for doctoring scrapes and hiding your presence, and following that system every time.

“Good systems make great scrapes,” said Terry Rohm of Tink’s. “It’s like running a trap line. Good trappers know how, when and where to apply scents while controlling human odors. They follow the same steps, first time, every time.” 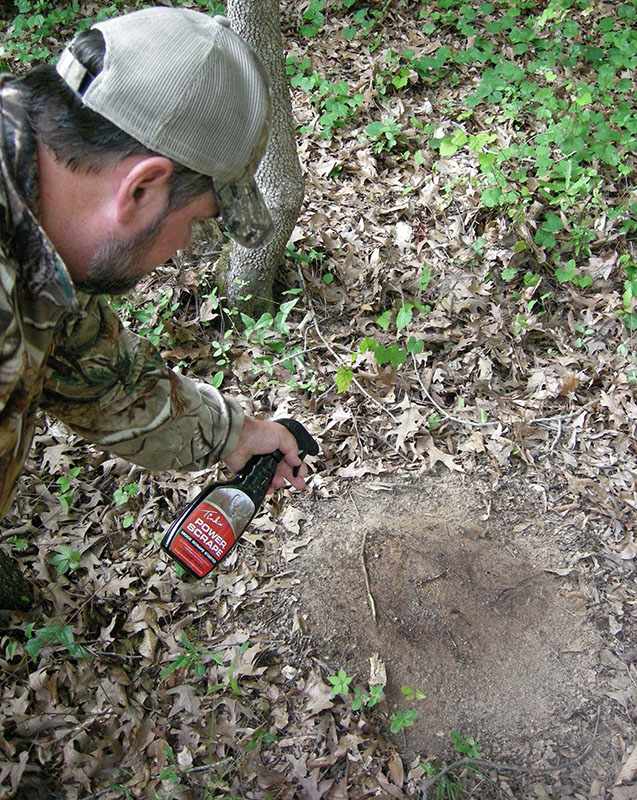 During “off-season” visits, bucks seldom paw the ground, or chew and twist the scrape’s overhanging limb. They usually just lick, nose, mouth or gently rub the limb’s tips. The tips look oily or greasy, with small hairs clinging to their surface.

The overhanging limb is vital to scrapes, and won’t be higher than 4.5 to 5 feet. As researcher John Ozoga of Michigan wrote: “When that fragile twig is carefully manipulated and anointed by bucks, it takes on magical powers that draw passing bucks like an electromagnet sweeping up pins. Without the overhead limb, there is no full-fledged scrape. Period!”

Rohm said scrape location is everything. No scent or overhanging limb is powerful enough to make bucks use sites unsuitable for scraping. Good sites are relatively flat, moderately dry, slightly more open, and along deer travel routes. Also, their soils are easily exposed.

“You’re trying to bring deer close to you while they move to or from bedding and feeding areas,” Rohm said. “Scrape Drippers don’t cost much, so you can create scrape lines to increase your drawing power.”

To get started, wash your clothing in Tink’s Vanish detergents and store them in a Tink’s Carbon Bag. Wear these Vanish Sprayclothes and rubber boots each time you visit your scrape lines. Spray with Vanish before entering the woods, and wear disposable latex gloves when working on scrapes.

For treating scrapes, Tink’s Power Scrape is designed for long-term use before whitetails begin chasing and breeding. “This scent isn’t like Tink’s #69,” Rohm said. “It has no urine and it has little smell. It’s pleasant to use. And because it’s urine-free, it’s legal to use in places that outlawed scents with bodily fluids. But just like Tink’s #69, deer love it.”

Starting in midsummer, spray Tink’s Power Scrape on the scrape’s overhanging limb, the ground below, and surrounding plants if you rubbed against them. Use a stick or trowel to remove leaves and debris, and rake the ground to monitor tracks. Fresh dirt is also an attractant.

Pour Power Scrape into Tink’s Scrape Bomb Dripper, stopping at the 2-ounce “Max Fill” line. This will last four to five days, depending on barometric pressure. It drips by day as pressure rises with air temperatures, and stops at night as temperatures drop. Caution: Filling the dripper to the top prevents pressure from building, decreasing flow. Rohm suggests experimenting with water beforehand to determine how fast you want the dripper to drip.

Tie the Scrape Bomb Dripper above the overhanging limb so the Power Scrape lure drips onto the exposed soil. “Tie the dripper on tightly,” Rohm said. “Bucks often try hooking it and tearing it out if they can reach it with their antlers.”

By controlling human odors at scrapes, and using Power Scrape as an attractant, hunters ensure bucks will continue to visit your scrapes. “Once you get bucks coming, keep following your system when you add scent, check your cameras or go hunting,” Rohm said.

Finally, as the rut nears and bucks quit visiting scrapes, use Tink’s #69 Doe-In-Rut Buck Lure more often. Place it upwind of your stand and, ideally, shoot the buck while it’s unraveling the scent trail, not when it reaches the scent itself.

“You must have ideal tree-stand setups to take advantage of scrapes and scents,” Rohm said. “The overhanging branch is the No. 1 factor in making scrapes, but you need killer stands to make a successful hunt.”